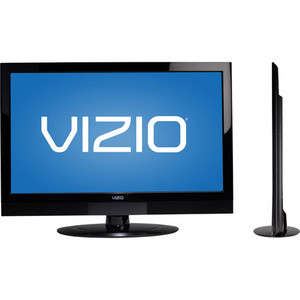 Editors Note – Vizio might not be the first name you think of a new TV, but they are trying to take a chunk out of samsung’s smart TV market, just might be worth looking at when you’re ready to make the smart TV plunge!!

Vizio’s low-priced, high-value formula has a couple of new incarnations in the 60- and 70-inch E1i-A3 TVs, which are selling for one and two grand respectively at press time. Those prices are bargain-basement for such massive, LED-powered screens alone, but Vizio goes one better by mixing in features like Smart TV and a remote with a real QWERTY keyboard.

To get better picture quality in a 60-inch LED TV you’d have to pay another couple hundred dollars for Sharp’s LC-LE640U series, with its crucial ability to display a darker shade of black. The Vizio E1i-A3 series competes well against that TV in other areas of picture quality, however, making it undoubtedly the superior bargain. It has a tougher row to hoe against the excellent Panasonic TC-P60U50 plasma, which also costs about a grand but is “dumb TV,” for better or for worse. Buyers who prize picture above all else and don’t want a 70-incher should choose the Panasonic, but for everyone else in the big-screen market, the Vizio E1i-A3 is our value pick so far this year.

Series information: I performed a hands-on evaluation of the 60-inch E601i-A3, but this review also applies to the other screen size in the series. The two sizes have identical specs and according to the manufacturer should provide very similar picture quality.

If you’re reading this in early October, Vizio tells us that the 60-inch model will be shipping “soon” and the 70-incher will ship somewhat later. The company was not any more specific than that as to timing.

Design
Mainly thanks to its ultraminimalist, thin-bezel design, the E601i-A3 is the nicest-looking Vizio TV I can remember. The frame measures only seven-eighths of an inch wide along the top and sides of the screen, and along the bottom it’s just a bit thinner. That’s about the same as the bezel on Samsung’s UN60ES6500 and thinner than that of Sharp’s LC-60LE640U.

As a result the Vizio is almost all screen when seen from the front, and as thin as any LED TV when viewed in profile. That thin look, combined with Vizio’s understated glossy black styling, puts Vizio’s E1i-A3 into the same styling league as TVs from the more well-known name brands. As is common at this price level, the panel doesn’t swivel atop the stand.

To make it easier to enter searches and other information into Smart apps, the E1i-A3 comes with a remote with a full QWERTY keyboard on its flip side. While not up to the standards of a good smartphone keyboard, it’s roomy and fine for occasional use — easily outclassing the tedious onscreen virtual keyboards required by most other smart TVs. I liked the tactile “click” as I depressed keys, though I was annoyed at constantly having to flip to the front of the remote to enter numbers. It’s also worth noting that since the remote uses infrared to signal the TV, you have to keep its front edge facing the screen, which can seem unnatural if you’re used to holding the keyboard more perpendicular to your face.

The front face of the remote is not my favorite. The menu/exit/guide/back keys are too small and there’s not enough differentiation between the keys. Also, there’s no direct button for switching aspect ratio. The remote’s best feature is that it has dedicated keys for Amazon Instant and Netflix; unfortunately, Vizio replaced the Vudu app shortcut key on previous clickers with M-Go (see below). Its worst, shared by the QWERTY side, is lack of any illumination.

Vizio employs the same menus on this set as on its other Smart TVs, and I’m a fan. The menu system resembles an app in appearance, and I liked that the picture settings section is integrated into the main App taskbar (see below). Responses were fast, explanations were complete, and I had no problems finding my way around. I also appreciated the easy guided-setup process and unusually complete onscreen manual.

Features
The E601i-A3 sits in the features sweet spot for LED-based LCD TVs. Its edge-lit LED backlight forgoes the local dimming found on models like Vizio’s own M3D0KD, but the company does include 120Hz processing. Also left off the list is 3D, although in my book that’s no big loss, especially on a TV priced this competitively.

Unlike most TVs that can play back photo, music, and video files from an attached USB stick, the Vizio cannot play such files from a home-networked source via DLNA. It also lacks the capability, found on Vizio’s higher-end sets, to control other devices .

Smart TV: Compared with most major TV makers’ smart TV implementations, Vizio’s VIA suite of Smart TV apps, which looks exactly the same as it did in its first generation, seems dated. Its design makes finding the app you want more difficult than it should be since you’ll need to scroll through the small ticker at the bottom of the page. Yes, you can rearrange the ticker and weed out the apps you don’t want, but it’s still a pain for those who want to keep more than a few apps installed. Response times were decent, but not as snappy as from Samsung’s or LG’s app suites. That said I do prefer Vizio’s design to Sharp’s.

On the other hand, content selection is among the best available today — and comes close to matching Roku‘s, trading HBO Go for YouTube. Vizio leaves no major video services off the list, although it still doesn’t have sports apps like MLB.TV and NHL. Skype is now active, although to use it you’ll need to purchase the $70 camera/speakerphone. With Rhapsody, Pandora, TuneIn Radio, and iHeartRadio there’s plenty of musical choice too. There’s no Web browser, but that’s no major loss since TV-based browsers are universally inferior to smartphone, tablet, and of course PC browsers.

Vizio lacks an “app store” and any paid-app choices, but the Yahoo Connected TV Store (the VIA engine is based on Yahoo widgets) has plenty of free, somewhat useful options like AOL HD, eBay, Fandango (with ticket purchasing), iHeartRadio, SnagFilms, Vimeo, Wealth TV 3D, and WSJ Live. The remainder of the more than 150 other apps are inevitably less useful, including umpteen apps devoted to local news channels.

← What the Bing! Should You Make The Switch?
Ask One of the World’s Top Headphone Engineers Whatever You Want [Q&A] →